Shiba Inu Price Prediction  year is 2013 when the crypto-verse is still getting started, how would one even know, that years down the line. Dog-based meme cryptocurrency could return millions in gains for investors. Whilst Dogecoin still holds the crown of the largest meme coin.

Successively, its counterpart Shiba Inu with its heroic run from the fourth quarter of 2021 and escalating dominance. Has been earning prominence in the industry. Investors and traders are keen on Shiba Inu, as the team will be venturing into a host of new-age applications.

The major one being its metaverse “Shiberse”, wherefore the business is dwelling on wild conjectures, over SHIB’s price prediction. Wondering if SHIB will ever reach $1? Buckle up, as we take you on a drive-through of the price forecast of SHIB for 2022 and beyond. 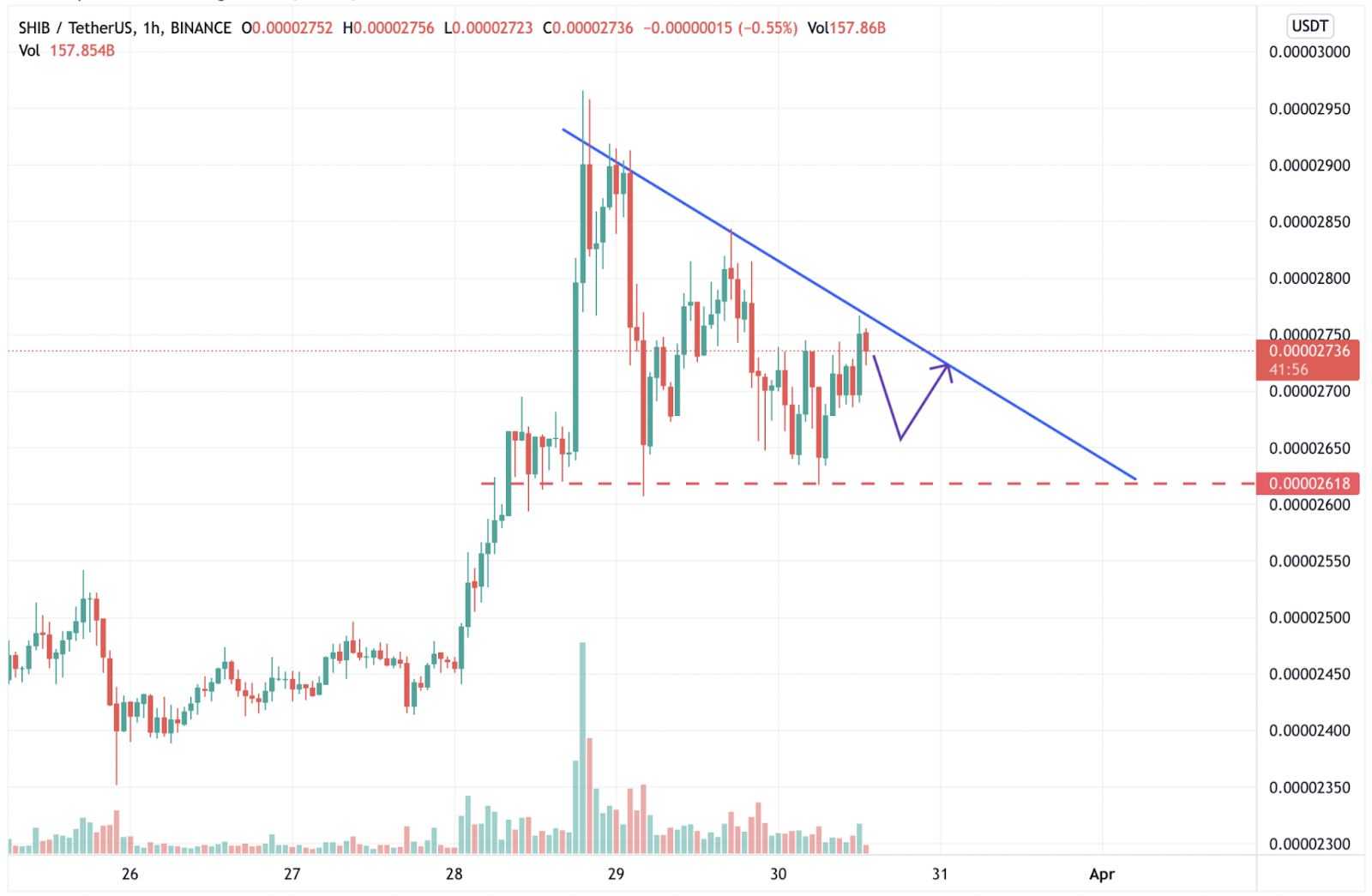 Post its breakout of the barrier, the digital asset will have to surpass its resistance at $0.00002736. Before kickstarting its projections for the second quarter. On the flip side, the meme coin could continue its projections in the descending triangle. Until it reaches its support at $0.00002618. After which the digital asset could breach $0.00002550 before a rebound.

Bullish case: If the bulls react to the developmental initiatives of the makers, and if SHIB witnesses its listing on Robinhood. The meme coin could get a sentimental boost, which could help it close Q2 trade with 45% gains at $0.0000404.

Successively, a continuity in usual buying and selling pressures could end the annual trade at $0.0000407. That said if the bulls take charge to drive the price of SHIB. The price could gulp up a zero taking the price to $0.0001025. However, bearish trends could chain the price at $0.000027.

Shiba Inu Price Prediction For The Next Three Years

If the visionary developments of the makers fall in place, and if Shiberse emerges as an eminent player in the metaverse. Which is expected to boom over the years, SHIB price could land at $0.0001892. That said if the community drives the price with usual buying and selling pressures. SHIB could trade at an average price of $0.0000861.

On the downside, if the investors fail to keep up with the liquidity of the digital asset on exchanges. FUD and negative sentiments might knock down the price to $0.0000497.

What Does the Market Say?

According to Coin Price Forecast’s Shiba Inu price prediction for December 2030, the token’s price might hit $0.00204185. Meanwhile, trading education believes that SHIB will reach $0.002736 by December 2030. That said, at that point, the market cap of Shiba Inu needs to be at least $50 billion.

What is Shiba Inu (SHIB)?

SHIB is the native and the very first token of the Shiba Inu ecosystem, which is powered by the Ethereum blockchain. Unlike its rival Dogecoin which employs a tech similar to that of Bitcoin. The tokens are ERC-20s, which facilitate easier transactions.

Built for fun meme coin, is now spreading its wings towards utility. With “n” number of initiatives such as its DEX Shibaswap, Shiberse, and Shiboshis NFTs, amongst others. The fraternity is now expecting an announcement around Shiberse. Which could bring impetus to the price action of SHIB.

Following SHIB, the network enlisted the next token, called LEASH. Kickstarting as a Rebase token, the network quickly flipped into fungible form like the former token. Unleashing the token, the keys were burnt and currently, the token has a fixed supply of 100k. Anyone who keeps up the liquidity of the currency will receive special rewards, says the network!

Being in the market as a developing project, the network is highly secure as it is powered by Ethereum. With Ethereum planning to switch from PoW to the PoS consensus mechanism, we can expect Shiba Inu to have a part of favors from this transition! The altcoin is listed on eminent exchanges like Coinbase Pro, Binance, Kucoin, WazirX, Uniswap amongst others.

Shiba Inu despite its treacherous path over the past few months is still sailing 41737.0% over the past 12-months. It is to stress that, SHIB’s price is currently down 68.5% from its ATH of $0.00008616. According to Coinpedia’s formulated Shiba Inu price prediction, if the bulls barge in. Then SHIB might hit feasible highs to claim a New ATH of $0.0000812 by the year-end.

On the downside, if the meme coin falls prey to bearish trends, led by massive liquidations. The price could entangle into a bearish hook and might hit the bottoms at $0.00000979.

The possibility of the Shibu Inu coin touching the $1 mark appears to be a far-fetched reality. What makes the coin different from other popular digital coins such as Bitcoin is its volume. There is currently more than 1 quadrillion of Shiba Inu coins in total.

One quadrillion equals one thousand trillion. So, if the price of the Shibu coin reaches $1, then the market cap of the digital coin will be $1000 trillion. Which clarifies the bleak possibility of the digital asset claiming $1 at any time in the near future.

How Did SHIB Price Perform Earlier?

Resuming June, the SHIB price was at $0.00000929, following a brief period of consolidation. It was in September when SHIB retested a major resistance level of $0.000008587. Following its listing on Coinbase’s platform. SHIB’s price rose an astonishing 1216% to reach its ATH from the bottom of 29th September. That said, the price has been on a descent thereon, closing its annual trade at $0.00003302.

To learn about the prediction of Cardano for 2022 and beyond click here!


A: Yes, Shiba Inu has been making notable strides towards developments and utility. Which will eventually help compound the gains over time.


A: Since there are about a quadrillion SHIB if the price of the Shibu coin reaches $1. Then the market cap of the digital coin will be $1000 trillion. Which justifies the bleak possibility in near future.

A: If investors and traders drive the price of SHIB following notable upgrades in the ecosystem. And the digital asset sees its listing on Robinhood. The target could probably be achieved.

Q: Where can I buy SHIB?


A: SHIB is available for trade across prominent exchanges such as Binance, Coinbase Pro, Okex, amongst others.

Q: How many SHIB are burned in total to date?